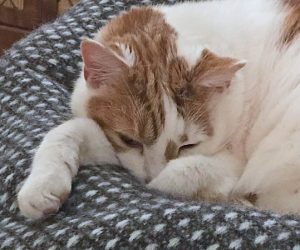 Crumpet developed symptoms that looked a lot like Feline hyperesthesia following a move from London to York. He was twitching uncontrollably and racing round the house as if trying to get away from the itch. He was also diagnosed with an unrelated heart condition at the same time and avoiding as much stress as possible for him became a huge priority. Jody was absolutely brilliant with him, offering in clinic and then at home acupuncture for him when it became apparent that travelling to the vet was an additional stressor. Feline hyperesthesia is tricky to treat but after five to six months of acupuncture Crumpet has noticeably settled down and the twitches are now very infrequent and much, much less severe than when Jody first saw him. Cats aren’t perhaps the most obvious candidates for acupuncture but she was wonderful with him, letting him dictate the pace of the treatment. He put up with the needles like a champ, and other than being a little sleepy following treatment, there was no other noticeable effect – other than far less twitching! I can’t recommend Jody enough. She was endlessly patient and kind, and really prioritised Crumpet’s well-being throughout. 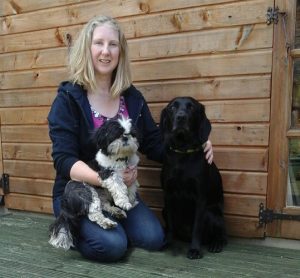 Covid update: new patients can start treatment
I have been treating my regular canine patients outdoors over the last few months to ensure social d...
Jody Lam Veterinary Acupuncture Facebook Page
www.facebook.com/needlevet\r\n\r\nCheck out my Facebook page @needlevet and like and follow it for regul...
Great news!
Lily\'s owners have just let me know that she is now standing up on her back legs! When we first star...

This website uses cookies to improve your experience while you navigate through the website. Out of these, the cookies that are categorized as necessary are stored on your browser as they are essential for the working of basic functionalities of the website. We also use third-party cookies that help us analyze and understand how you use this website. These cookies will be stored in your browser only with your consent. You also have the option to opt-out of these cookies. But opting out of some of these cookies may affect your browsing experience.
Necessary Always Enabled
Necessary cookies are absolutely essential for the website to function properly. This category only includes cookies that ensures basic functionalities and security features of the website. These cookies do not store any personal information.
Non-necessary
Any cookies that may not be particularly necessary for the website to function and is used specifically to collect user personal data via analytics, ads, other embedded contents are termed as non-necessary cookies. It is mandatory to procure user consent prior to running these cookies on your website.
SAVE & ACCEPT